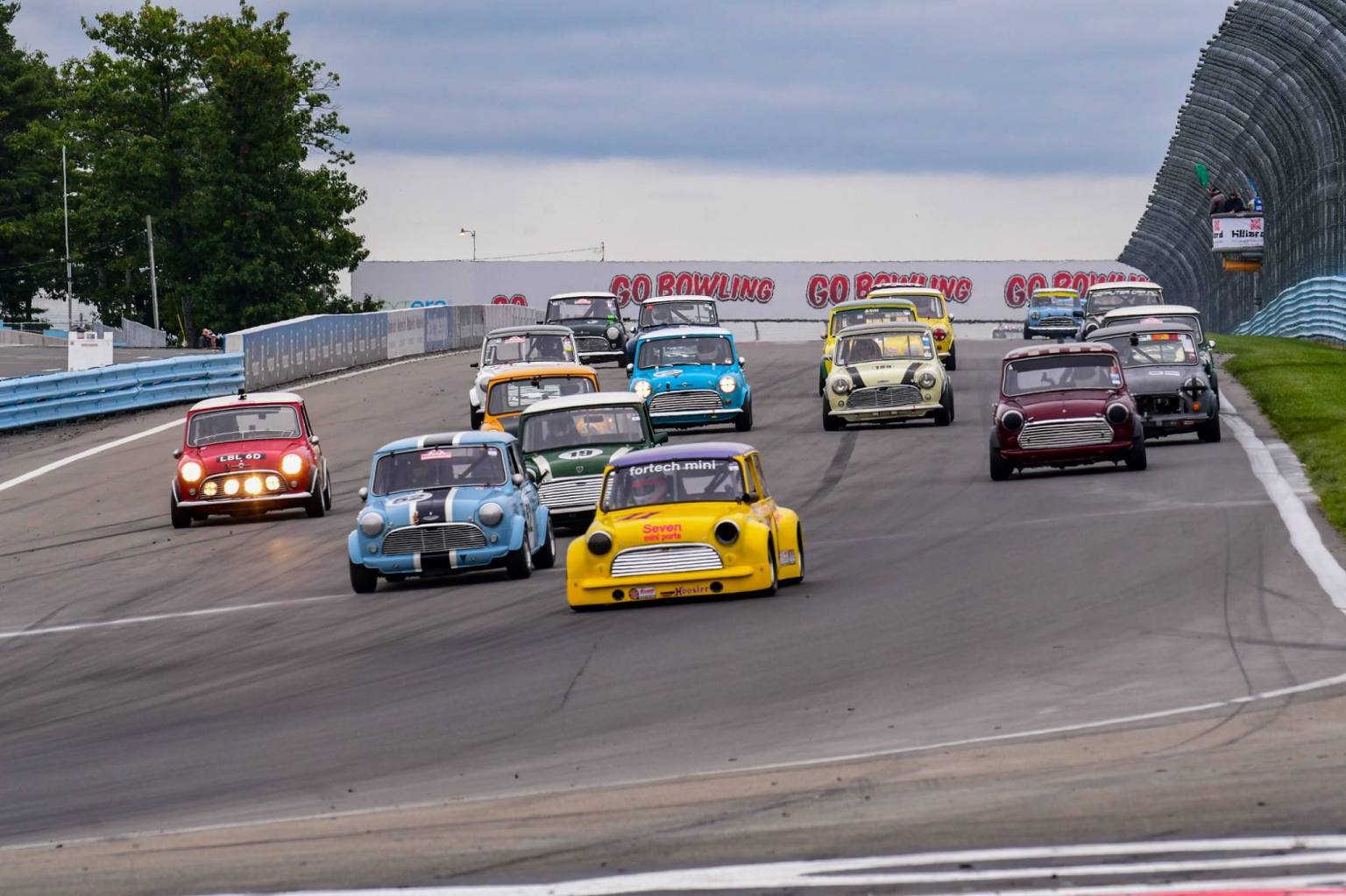 The SVRA Vintage Grand Prix at Watkins Glen International was the gathering point for everything Mini September 6th to 9th, 2018. Twenty-two Minis and two MINIS put on a fantastic show for enthusiasts and fans, competing in four separate classifications. Trophies were up for grabs in D-Sedan, C-Sedan, GTL/4/5, and BMW MINI, awarded by our Grand Marshall Paddy Hopkirk!

In conjunction with the racing activities, sixty VIP guests enjoyed the WG Mini Festival VIP Experience over at the Tower Suites throughout the weekend. Attendees enjoyed hot coffee and cold drinks, good food, and appearances by special guests David Hobbs, MINI racers Randy Smalley and Mark Congleton, Trans Am racer Marc Miller, and of course our Grand Marshall Paddy Hopkirk. A large gathering of Minis/MINIS were on display in the field below the Tower Suites, and Saturday night participants enjoyed three laps of the track in their street cars.

Mini racers received five track sessions, with practice, qualifying, and race #1 mixed Minis with Group 1 cars, while the feature race on Sunday was Minis only. The track had been recently re-paved, and the surface was very smooth and fast. Fortunately, the weather cooperated, with just a sprinkle of rain on Saturday. Temperatures however swung wildly from highs in the 90’s Thursday and Friday and very humid to the mid 50’s on Sunday – typical Watkins Glen!

Our official Mini Festival Grand Marshall Paddy Hopkirk toured the Mini Paddock on Friday, graciously signing autographs and speaking with the racers and crews. What an amazing privilege to have the Mini Legend Paddy Hopkirk at our event!

Fourteen Minis took part in the historic Downtown Festival Old Course Re-Enactment tour and car show on Friday afternoon. Minis being the featured marque of the weekend were all accepted into this invitation-only experience, and were in the first group of cars out. It’s not every day you get to drive your race car on the street with a police escort at sixty-plus miles per hour through the old course. Massive crowds lined the route, with an estimated twenty-five thousand spectators in the downtown area. After the tour, we converged on the Regogo Racing paddock for their legendary Friday night Fish Fry! Thanks to the Regogo Racing team for inviting us.

Race #1 on Saturday resulted in an easy overall win for Doug Peterson in the #11 Fortech Mini, while Andy Nelson drove #52 to a solid second overall closely followed by Dave Morgan in the #19 car. It was an all-Mini lockout for the Group 1 race!

The Governor’s Cup Feature Race on Sunday was a Mini-only session, with twenty cars starting the race. Doug & Andy both got a great start, along with Dave Morgan, and these three cars quickly set the pace. Lap times for the top three cars were below the 2:20’s. Andy made a small mistake coming into turn 1 at the start of lap #5, slowing his momentum just enough that Dave was able to pass him before the bus stop. Dave and Andy had a great dice for the lead in the C-Sedan class to the checkered flag, with Dave holding on to a well-deserved second overall and 1st in C-Sedan. Doug cruised to a convincing overall win in the #11 Fortech Mini, with Andy finishing 3rd overall and 2nd in C-Sedan. A superb result for Toybox Racing!

Post-race, Minis flooded into the podium area, probably the most cars ever in that space! Paddy Hopkirk handed out trophies, a signed mug, and medallions to the race winners, and medallions to each of the racers. Each competitor also received a custom made shifter knob, generously donated by Bob Beauchemin.

The two BMW MINIS followed the Governor’s Cup race later in the afternoon. In the Group 8/12b Feature race, Randy had to pull out with fuel pump issues, while Mark Congleton went on to win the race! It was exciting to watch these guys take on much larger, more powerful cars.

The Watkins Glen Mini Festival was truly a once-in-a-lifetime race weekend! Our thanks to our crew Don Sobering and Gail Peterson, our sponsor Seven Mini Parts and engine supplier Swiftune Engineering, VIP event co-organizers Norman & Jesse Nelson and Ian Rae, the team at SVRA and Watkins Glen International, and of course our Grand Marshall, Paddy Hopkirk!

If you attended the event, please share your stories and pictures on the WG Mini Festival Facebook page!

An exciting start to the Governor’s Cup Race 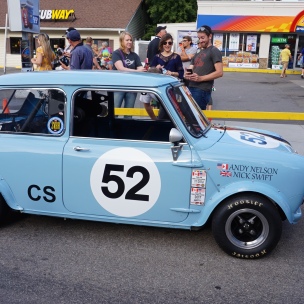 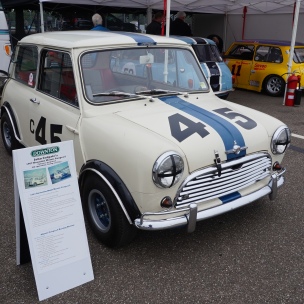 The John Colgate Mini hangin’ with the race cars. Thanks John Hedeen for bringing this special car to display!

Andy is all smiles after his third place overall win! 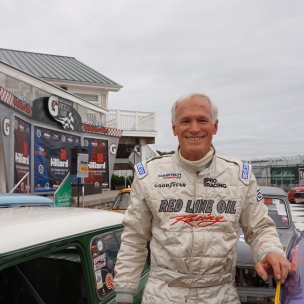 Ready for the re-enactment tour!

Minis flood into Victory Circle after the Governor’s Cup race 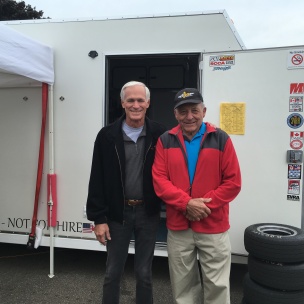 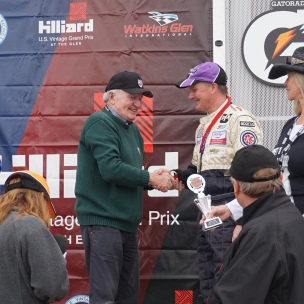 Great memories of an awesome event! 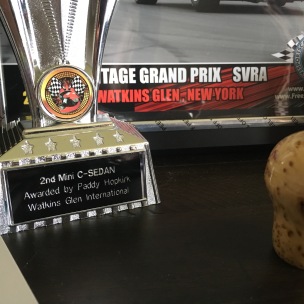 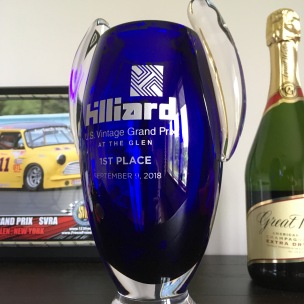